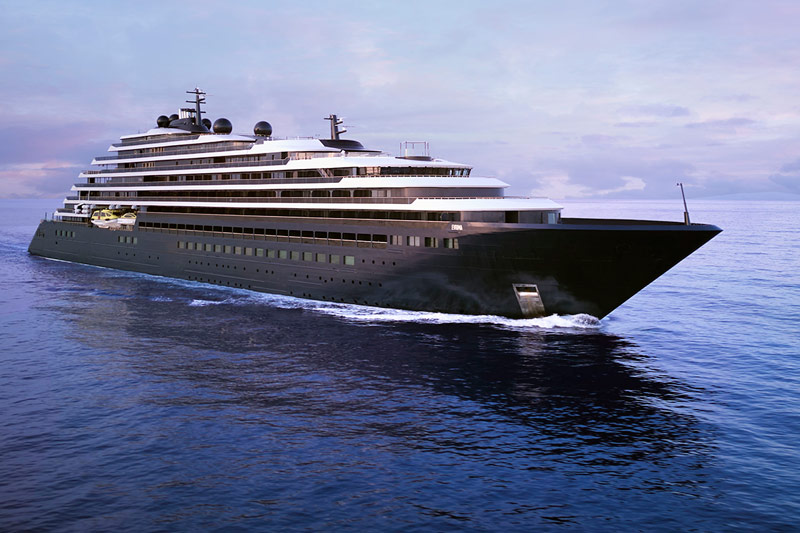 The Ritz-Carlton Collection’s first ever cruise ship, the Evrima is set to enter service today.

After a three-year delay, the mega yacht is welcoming guests in Barcelona for its first revenue cruise.

The seven-night voyage sails from Spain to France and includes two-day visits to both Palma de Mallorca and Saint-Tropez.

Before arriving in Nice, the cruise’s final destination, the Evrima is also set to sail to Alcúdia and Antibes – two unusual cruise destinations in the region.

Continuing its inaugural cruise program, the luxury vessel sails additional voyages in the Mediterranean and the Canaries before crossing the Atlantic in early November.

The Evrima will then offer different Caribbean itineraries as part of its 2022-2023 winter season. Also visiting South America and the Bahamas, the cruises depart from several homeports, including Bridgetown, San Juan and St. Maarten.

In early February, the 298-guest vessel is set to debut in the United States with a series of cruises departing from Fort Lauderdale.

According to Ritz-Carlton, all of the ship’s itineraries feature more time in each port, allowing for a “more leisurely cruise pace.”

Originally set to debut in 2019, the Evrima was designed as a luxury yacht. In addition to an array of public areas and ample open deck space, the 26,500-ton vessel offers premium accommodations, such as the Loft Suites.

According to Ritz-Carlton, the 12 two-story cabins are ideal for in-suite entertaining and feature a luxurious and modern experience, with expansive living area and two entrances.

The vessel also features a higher-than-average number of dining venues that includes ten different culinary experiences, such as an open-air steakhouse and seafood venue and several intimate specialty restaurants.

With The Ritz-Carlton Yacht Collection expanding its fleet, the Evrima is set to be followed by two additional luxury vessels in 2024 and 2025.