“We are redesigning the future of navigation on a strategic and technological level,” Luigi Matarazzo, general manager of the Merchants Ships Division at Fincantieri, told Cruise Industry News.

“The ships we are building will increasingly resemble large, hyper-connected, energy self-sufficient, lighter and greener, propelled floating cities, capable of recycling up to 90 percent of the waste produced onboard.

“With the technologies already available today, we can thermally recover up to 20 percent of the energy contained in the fuel,” he continued. 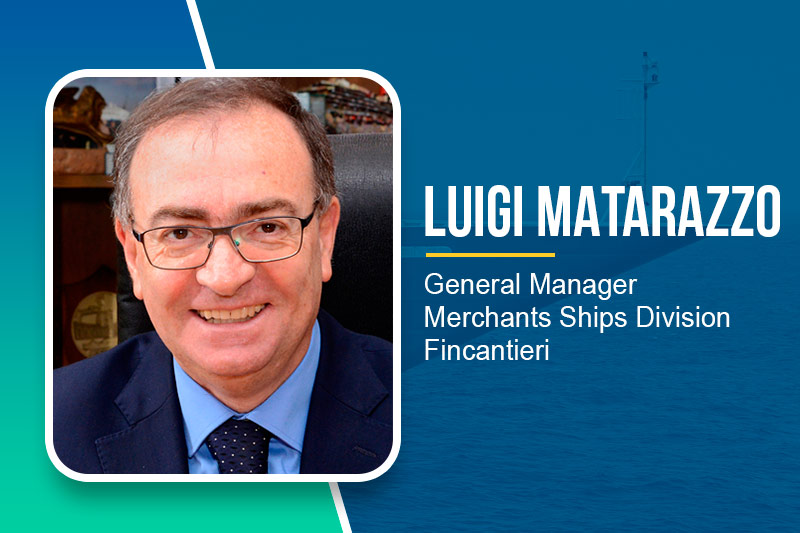 “And the efficiency measures recently introduced in non-propulsion systems onboard have led to further reductions. For example, a ship of about 130,000 tons is able to reduce its fuel consumption up to 1,200 tons per year, which corresponds to about 7 percent of the ship’s annual fuel consumption.

“We have validated and applied a series of initiatives on the ships we are building. Examples of energy saving solutions include fan coil installations in cabins and public areas, variable-speed electric motors, recalibration of fresh-water production systems, LED and other high efficiency lighting and automatic lighting controls, and much more. Each of these solutions can reduce fuel consumption from 48 to 290 tons per year. This is the path we are on.”

Playing a fundamental role in the green transition will be hydrogen and hydrogen carriers, such as ammonia, liquid hydrogen carriers and synthetic hydrocarbons derived from hydrogen, according to Matarazzo. But this will require the creation of a supply chain based on renewable energy sources, which is able to meet the increased demand without negative side effects on global warming, he added.

“On the technological level, the main obstacles are generated by constraints in terms of space and weight. Fuel cells, batteries, fuel tanks, energy recovery and auxiliary systems have significant impact on the onboard space and weight of a ship.

“However, I want to stress that the challenges do not lie solely with the cost-efficient application of new technologies. In fact, there are important non-technological barriers.

“In terms of resources, there is still no clear and well-defined scenario regarding future availability of hydrogen and its derivatives, which will also certainly drive pricing (of fuels).

“Production capacity and a network of supply hubs will be key enabling factors to accelerate the decarbonization of the shipping sector.”

Since 2021, Fincantieri has been committed to implementing measures to improve its yards’ impact on the environment. The latest initiative are solar farms being built at five of the yards to generate more green electricity while also reducing the energy bill, said Matarazzo.  Installations will feature 22,000 solar panels covering an area of more than 50,000 square meters, able to produce about 10 MW.

Fincantieri is also part of a public-private partnership launched by the European Commission and the Waterborne Technology Platform to decarbonize waterborne transport, as well as several joint ventures with private companies and research organizations exploring new fuels.

Meanwhile, the next 18 months will be busy for Fincantieri.

“In Monfalcone, by the end of this year we will deliver the MSC Seascape, the second EVO class ship and the fourth vessel in MSC Cruises’ Seaside class, and then, in 2023, Explora I, the first of six luxury ships ordered by MSC’s Explora Journeys brand,” Matarazzo said.

“Also next year, Marghera will deliver the second ship in Norwegian Cruise Line’s Prima class, the Norwegian Viva, followed by Cunard Line’s Queen Anne. The Sestri yard will deliver the Vista, the first of two new generation ships that will start the Allura class for Oceania Cruises; a fourth ship for Virgin Voyages; a ninth and tenth ship for Viking Cruises; and the newest ship for Regent Seven Seas Cruises.”