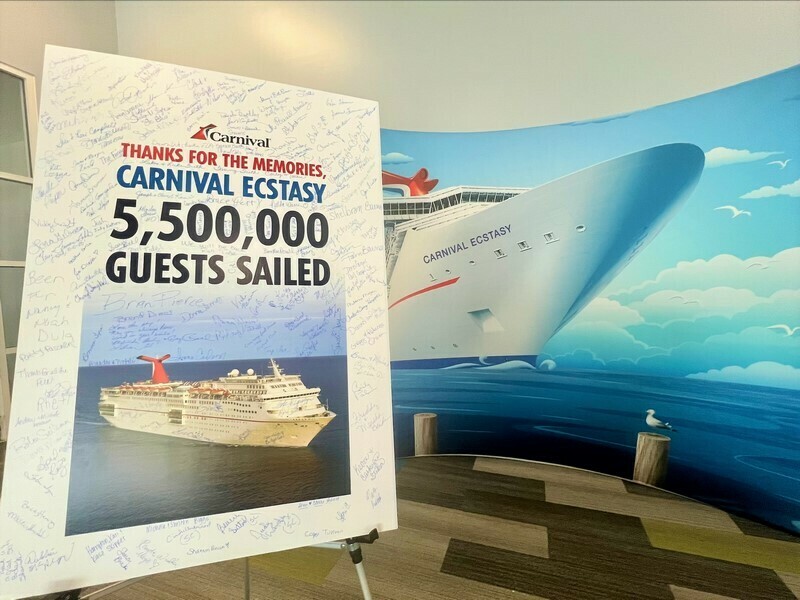 Wrapping up a 31-year career, the Carnival Ecstasy is setting sail on its final voyage for Carnival Cruise Line on Monday

One of the remaining Fantasy-class cruise ships, the 1991-built vessel is offering a five-night cruise to Mexico before leaving the fleet of the U.S.-based company.

The farewell cruise sails roundtrip from Mobile and includes visits to Puerto Progreso and Cozumel, as well features as two days at sea.

After two years out of service due to the pandemic, the Ecstasy welcomed guests back in March for its last season.

Sailing from its Alabama homeport, the 2,040-guest vessel sailed a series of four- and five-night to Mexico and the Western Caribbean.

The operation also marked Carnival’s return to Alabama after a 24-month hiatus.

The 70,367-ton ship is currently the oldest vessel in Carnival’s fleet and was last refurbished in 2019.

Highlighted by a multi-story atrium, public areas with themed looks and a resort-style pool deck, the Ecstasy also offers most of the company’s recent signature experiences, including Guy’s Burger Joint, RedFrog Rum Bar, the Alchemy Bar and more.

Ecstasy’s final voyage marks the departure of yet another Fantasy Class vessel.

Of the original eight sister ships, five have already left the Carnival fleet – including the Carnival Sensation, which was beached for scrapping earlier this year.

While the first three were sold directly to ship breaking yards in Turkey, the Fascination saw the chance of a second life in Asia after being acquired by a Chinese cruise line.

Just months after being converted into the Century Harmony at an Asian shipyard, however, the 1994-built ship ended up beached for scrapping at Gadani, Pakistan.

With the Ecstasy also biding farewell, only the Carnival Elation and the Carnival Paradise remain in active service.

The first is presently based year-round in Jacksonville, while the second sails year-round from the Port of Tampa Bay.