The Carnival Luminosa conversion is making progress in Italy. After wrapping up its Costa Cruises career earlier this month, the vessel is being prepared for its Carnival Cruise Line debut.

Currently in drydock, the 2009-built vessel is already sporting the new hull livery of the U.S.-based brand, while its funnel has been repainted with Carnival’s traditional colors.

The former Costa Luminosa also saw a change of flag, moving from an Italian to a Portuguese ship register.

Work is also underway on the ship’s interior, with public areas being adapted to offer most of Carnival’s signature experiences and spaces such as Playlist Productions, The Punchliner Comedy Club, Limelight Lounge, Piano Bar 88, Alchemy Bar, RedFrog Rum Bar, Serenity Retreat and more.

After leaving the shipyard, the Carnival Luminosa is set to welcome its first guests in early November. 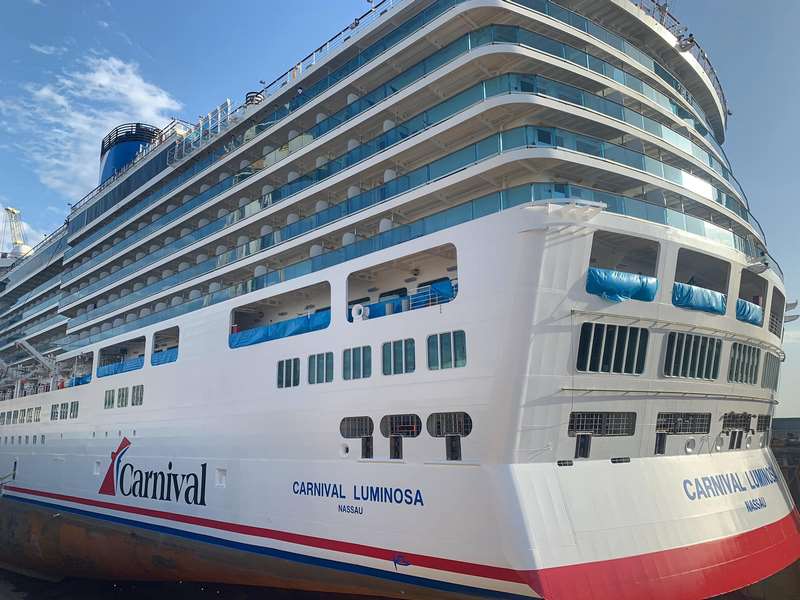 After completing its winter season, the vessel is set to debut in the United States in May for its first summer program in Alaska.

Departing from Seattle, it will offer seven-day sailings as well as six- and eight-day cruises to popular ports such as Juneau, Ketchikan, Sitka, Skagway, Icy Strait Point, and the scenic cruising of Tracy Arm Fjord.

In September, the ship will sail Carnival’s longest ever cruise, a 30-day transpacific itinerary that features visits to Alaska, Japan, the Philippines and Indonesia.

According to Carnival, the Luminosa is a sister to its four Spirit-Class vessels. Originally built for Costa Cruises, the ship 92,000-ton ship has capacity for 2,260 guests, in addition to 1,050 crew members.