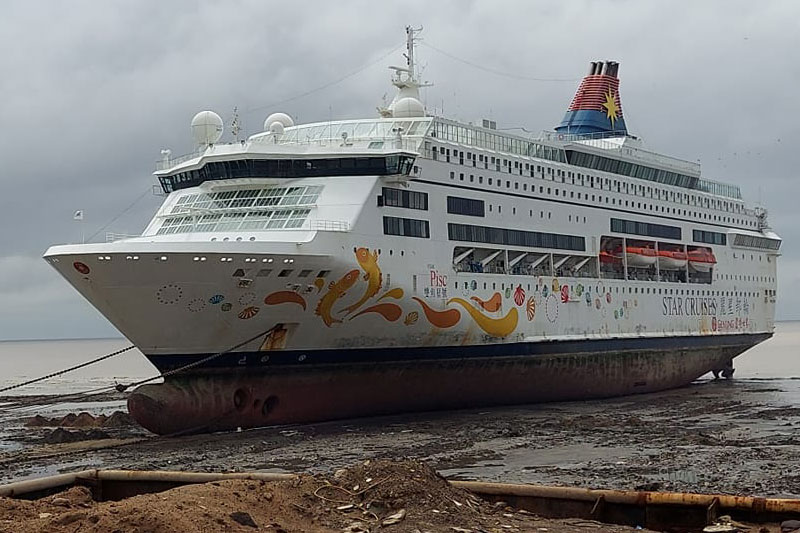 The Star Pisces was beached for scrapping in Alang, India, on July 12.

Formerly operated by Star Cruises, the 1991-built vessel will now be dismantled by one of the many local ship breaking yards.

During the process, its building materials, fixtures, engines and systems, are set to be sold off for repurposing or recycling.

Ending a 31-year sailing career, the Pisces was originally built for Viking Line as the cruise-ferry Kalypso.

After being acquired by Star Cruises in 1993, the 40,000-ton ship spent the last three decades offering cruises catering to the Asian market.

Before the COVID-19 pandemic, the vessel used to offer one-night cruises to nowhere departing from Hong Kong.

More recently, in December, the 1,090-guest ship started what turned out to be its last operation, kicking off a series of short cruises in Malaysia.

Sailing from the Penang, the program marked the its return to service after a two-year operational pause.

With Genting filing for liquidation shortly after, however, the ship found itself out of service again in late January.

After spending four months laid-up in Southeast Asia along with other former Star Cruises vessels, the Pisces began its last voyage in early June.

With the Star Pisces now beached, a total of ten cruise ships have been sold to ship breaking yards in 2022.

The 1988-built vessel arrived at Aliaga in May, following a four-year stint serving as a floating hotel at a Genting-owned shipyard.

After leaving Southeast Asia along with the Star Pisces, two additional ex-Star Cruises, the SuperStar Gemini and the SuperStar Aquarius, were also expected to arrive at scrapyards soon.

The vessels, however, sailed to Sri Lanka, where, according to local news reports, they are set to spend a month in lay-up.