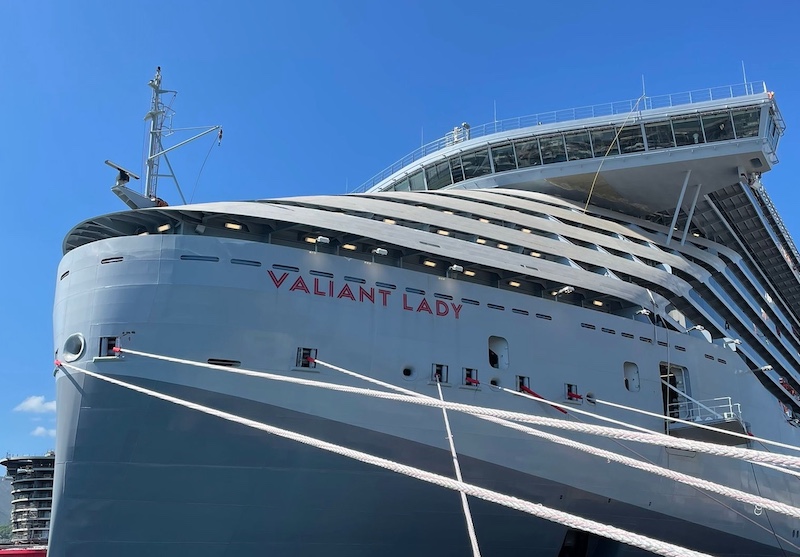 Eight months after being delivered, the Valiant Lady is officially entering service for Virgin Voyages. As the company’s second vessel, the newbuild is kicking off its inaugural season today in England.

Departing from Portsmouth, the three-night maiden voyage includes an extended call in Zeebrugge, Belgium. Serving as a gateway to other Belgian destinations – such as Brussels and Bruges – with the ship being in port for a 27-hour stop.

Continuing its maiden season, the 2,770-guest vessel will be offering additional itineraries to Northern Europe and the Canaries from its UK homeport before repositioning to Barcelona in May.

Based at the Spanish port, the Valiant Lady is sailing a series of Western Mediterranean cruises during the summer. The program includes three different seven-night itineraries, with visits to popular destinations in Italy, Spain, France and Gibraltar.

According to the company, the vessel was designed to reflect a yacht’s sleek luxury, offering the intimate, elevated experience of a boutique hotel at sea.

An adults-only ship, it comprises over 20 dining venues onboard, in addition to many entertainment options.

A highlight of the lineup is The Manor, a two-story, 1970s-style nightclub inspired by Virgin’s heritage in the music business.

With well-being, relaxation and rejuvenation at the forefront, the Valiant Lady also has some unique features, such as the Athletic Club.

An outdoor training zone, the venue includes a boxing ring, in addition to strength and gymnastics equipment. Inspired by a New York sports clubs of the 1920s, it also has cabanas for relaxation, a sporty bar for socializing post-workout and more.

In January, Virgin Voyages announced plans to refresh the cabins of the vessel before it even started service.

The move aimed to elevate the design of the accommodations even further by bringing a “warmer energy and more sophisticated feel,” the company said.

A third vessel is entering service for Virgin later this year, with the Resilient Lady scheduled to debut in the Eastern Mediterranean in August.