Costa Toscana Debuts in the Mediterranean 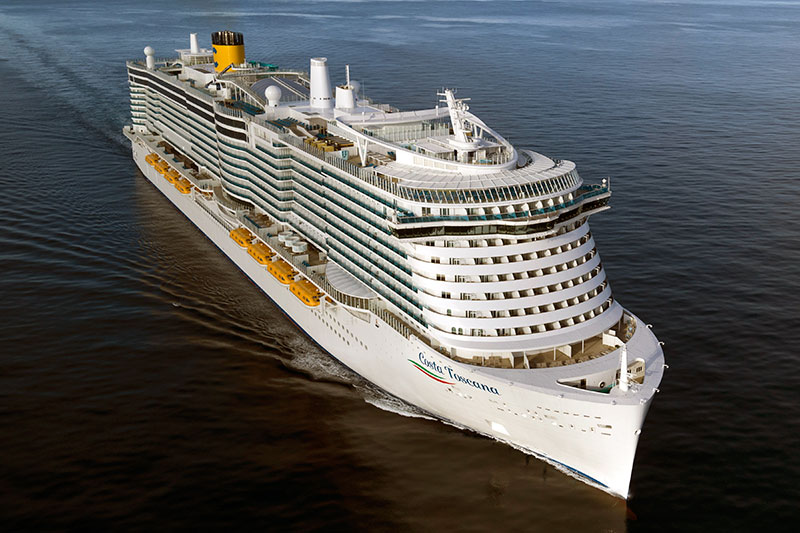 The new Costa Toscana is debuting today in Italy.

The second LNG-powered ship in the Costa Cruises fleet, the 5,224-guest vessel is welcoming guests for a series of week-long sailings in the Western Mediterranean.

Continuing its debut season, the Toscana is also offering different itineraries in the Western Mediterranean.

Through November, the 182,700-ton ship adds different ports to its schedule, including Palma de Mallorca, Ibiza and Naples.

In mid-December, the vessel repositions to Brazil for a winter season in South America. Offering a series of week-long cruises from the Port of Santos, the ship will become the biggest ever to offer a domestic program in the country.

A sister to the 2019-built Costa Smeralda, the Costa Toscana was delivered in December.

According to Costa, the new ship is considered a travelling “smart city” thanks to its green technology.

In addition to being powered by LNG, the vessel features other innovations designed to further reduce its environmental impact, such as an intelligent energy efficiency system and advanced seawater desalination plants.

As the company’s new flagship, the Costa Toscana pays tribute to the Italian region of Tuscany with a creative projected curated by Adam D. Tihany. According to Costa, the design aims to enhance and bring to life the best of the region, which gives its name to the ship, its decks and main public areas.

Furnishings, lighting, fabrics and accessories are all Made in Italy, and have been designed specifically for the Costa Toscana by 15 partners.

The products bring the colors and the atmosphere of Tuscany to all of the vessel’s public areas, including the Solemio Spa; the themed bars – which were designed in collaboration with major Italian and international brands; and the 21 dining venues.

The over 2,600 cabins also perfectly reflect Italian style and taste, according to the company.

“The Costa Toscana is an innovative ship that which fully interprets the new cruise experience, including the exploration of destinations, on which we have been working in recent months,” said Mario Zanetti, President of Costa Cruises.

With the debut of the Costa Toscana, Costa is also starting a new phase of its restart program. In addition to the newbuild, seven vessels are resuming service over the next months.

As a result, the company’s entire 12-ship fleet will be operational in time for the summer season in the Mediterranean and Northern Europe.

“Our restart will bolster an ecosystem that before the pandemic generated an annual economic impact of 12.6 billion euros in Europe, including 3.5 billion in Italy alone, with over 63,000 jobs,” added Zanetti.