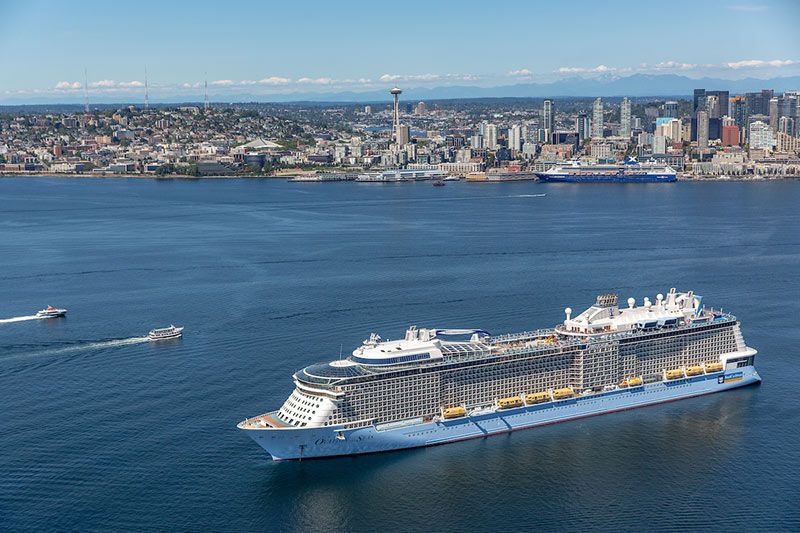 The Port of Seattle is looking forward to a strong 2022 after being among the first North American cruise ports to resume service. The Serenade of the Seas launched a shortened Alaska season on July 19 of last year. which saw 83 departures by different ships, concluding with the Norwegian Encore on October 23.

“It went well,” Stephanie Jones Stebbins, director of maritime operations, told Cruise Industry News. “It went very well because of all the advance preparation work done by the cruise lines, which were focused on being as safe as possible.

“We started working with our public health agencies almost a year before the season started and continued to work with them throughout 2021. We also made pretty significant upgrades to our facilities to install touchless features, enhanced ventilation and more.”

Processing passengers took more time and it required more space, according to Jones Stebbins. “When we started, we did not know that we would have the Delta variant coming along. So, the cruise lines adjusted to that and began requiring not only proof of vaccination but also proof of a negative test. And all that took more time and space although passengers were given appointment times to spread out the traffic.

“We adjusted too,” she continued. “We have a long pier (Pier 91) with one terminal in the middle that typically accommodates two ships at a time. But we operated with only one ship, because of the need for additional space and time.”

That meant that turnarounds were spread throughout the week.

In addition, one ship could call at Pier 66, which is used exclusively by Norwegian Cruise Line and its sister brands.

When the 2022 season starts, Seattle hopes to be able to accommodate three ships again simultaneously as it has in the past.

In addition, before the pandemic, Seattle was planning a third facility, Terminal 46, which has been put on “pause” for the time being.

Meanwhile, shore power, now available at Pier 91, will also be extended to Pier 66 for the 2023 season.

Among the passenger services offered in Seattle is the opportunity to check baggage at the port and thus being able to spend the day in the city before heading to the airport.

The port is committed to sharing the economic benefits that cruising is creating. “We want to reach parts of the community that have been the furthest away from economic opportunity,” Jones Stebbins noted. “We have many programs in Workforce Development to bring people into the maritime industry, and we support women- and minority-owned businesses. We also have initiatives to connect small, local businesses with the cruise lines. So, we are making sure the economic impact is felt throughout the community.”