These Cruise Ships Were Scrapped in 2021 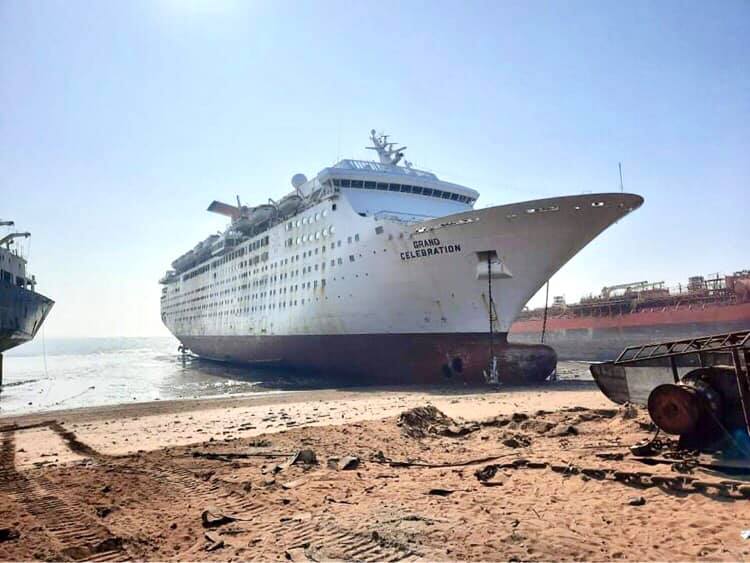 Cruise Industry News has looked at which cruise vessels ended up in scrapyards this year.

The Grand Celebration was beached in Alang in January, after a long voyage from the Bahamas. The 1,800-guest vessel originally entered service for Carnival Cruise Line in 1987. It also sailed for Bahamas Paradise Cruise Line and IberoCruceros.

The ex-Tropicale is another former Carnival Cruise Line ship scrapped in 2021. The 1,022-guest ship arrived in India in January when it was beached in Alang. The vessel was last operated by the Japan-based Peace Boat Organization as the Ocean Dream.

The Marco Polo ended its oceangoing career in 2021. Following the demise of its former operator, the British Cruise & Maritime Voyages, the 1965-built vessel ended up being sold to Indian breakers in January.

After its quick sale in the early stages of the COVID-19 pandemic, the 1996-built Costa Victoria was sent for scrapping in 2021. The former Costa Cruises ship arrived at the Aliaga Ship Breaking Yard in January and was beached soon after.

The 1985-built Magellan was beached for scrapping in Alang in February, after being auctioned by an English court in late 2020. The vessel was built for Carnival Cruise Line and last sailed for Cruise & Maritime Voyages until the cruise line’s entry into administration in July 2020.

The Columbus is another former Cruise & Maritime Voyages vessel that ended up scrapped after the company’s demise. The vessel – which was built in the late 1980s – was beached in India in April. The Columbus was originally ordered for Sitmar Cruises and had also sailed for Princess Cruises, P&O Cruises, P&O Australia and Ocean Village.

The former Boudicca from Fred. Olsen Cruise Line was beached for scrapping in Aliaga in May. The 1973-built vessel was sold by its former operator in 2020 and was set to become an accommodation vessel before being sent to the breakers.

The 1973-built Albatros was beached for scrapping in Alang Ship Breaking Yard in July. The vessel was last operated by Phoenix Reisen and had previously been sold in 2020, with the new owners planning to transform it into a floating hotel in Egypt.

The former Celestyal Experience was recently beached for scrapping at the Gadani Ship Breaking Yard in Pakistan. The 1993-built ship was last owned by Celestyal Cruises. The ship had also sailed for Costa Cruises in Asia as the Costa neoRomantica.