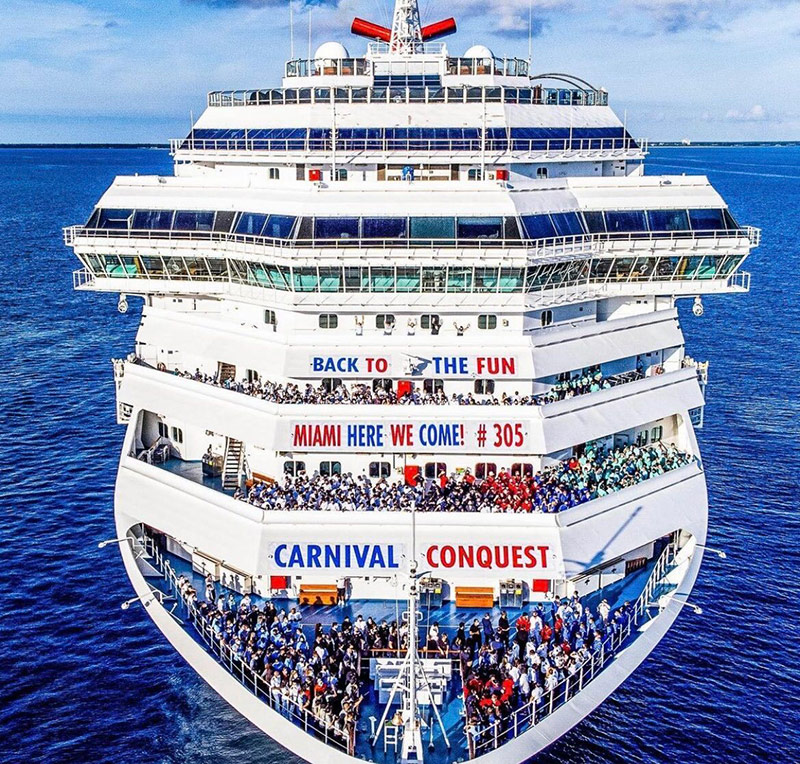 It’s a big day for Carnival Cruise Line as two cruise ships resume service for the brand in United States.

Returning after 21-month operational pause, the Carnival Conquest is welcoming guests back today in Miami. The Carnival Radiance is also debuting in Long Beach following a huge refit that got delayed by the pandemic.

The Carnival Conquest is kicking off a program of short cruises to the Bahamas and Mexico.

The vessel’s three- and four-night itineraries also include stops at Half Moon Cay and Princess Cays, two private destinations in the Bahamas operated by the Carnival Corporation.

The 2002-built Carnival Conquest offers a host of onboard facilities and features, including 22 lounges, bars and nightspots with dramatic interiors inspired by artists from the Impressionist period.

In 2012, the 2,974-guest Conquest underwent a multi-million-dollar refurbishment to receive significant upgrades in dining, bar and entertainment.

The latter, however, is undergoing emergency repairs in Europe and is set to be replaced by the Carnival Liberty and the Carnival Sunshine starting on Dec. 19.

The ship is welcoming guests in the Long Beach Cruise Terminal, kicking off a series of short cruises to Mexico and California. The year-round schedule includes three- and four-night itineraries visiting Ensenada and Catalina Island.

Formerly known as the Carnival Victory, the 2000-built vessel underwent a major $200-million refit during the period, receiving new interiors and features.

Another highlight of the work was the addition of the second seagoing Big Chicken, a restaurant created by Carnival’s Chief Fun Officer Shaquille O’Neal that debuted on the Mardi Gras earlier this year.

Two additional Carnival ships, the Carnival Panorama and the Carnival Miracle, are also currently cruising on the West Coast, with sailings from Long Beach.