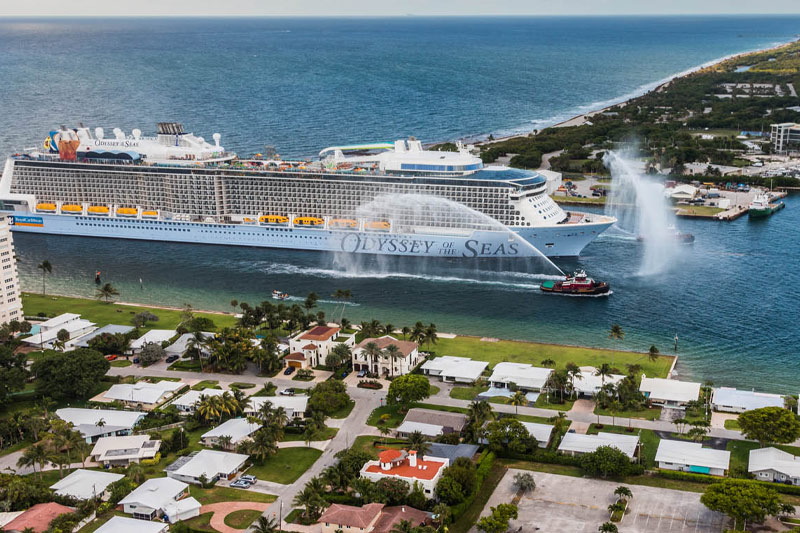 The Explorer of the Seas marked Royal Caribbean’s return to Puerto Rico on Nov. 7. Resuming guest services after a 20-month operational pause, the ship is now offering a series of Eastern and Southern Caribbean cruises from San Juan.

Built in Finland, the Explorer of the Seas entered service in 2004 as the second Voyager-class ship. One of the biggest cruise vessels in the world at the time, it has capacity for 3,100 guests and over 140,000 tons.

Extensively refurbished over the years, the ship now offers most of Royal Caribbean’s signature features, including the FlowRider Surf Simulator and the Playmakers Sports Bar.

Resuming service on Nov. 19, the Navigator of the Seas is launching service for Royal Caribbean on the West Coast.

The Voyager-class vessel will mark the company’s return to California after more than a decade, with a series of Los Angeles-based itineraries.

In preparation for its restart, the 3,500-passenger Navigator drydocked in Cádiz’s Navantia shipyard this summer.

Previously, in 2019, it went through a $115-million refit that added new features, such as resort-style Caribbean pool deck, the three-level signature bar The Lime & Coconut and the first blow-dry bar at sea To Dry For.

Wrapping up their summer cruise seasons, the vessels are getting ready for the winter, launching service from Miami, Galveston, Cape Liberty and more.

After originally resuming service in the Northeast, the Oasis of the Seas returned to Florida on Nov. 3. The vessel is now sailing to the Caribbean from Miami, offering a series of week-long itineraries.

The Allure of the Seas returned to Fort Lauderdale on Nov. 8 ahead of a series of winter cruises in the Caribbean. The Oasis-class ship was previously sailing from Port Canaveral.

After spending the summer in England, the Anthem of the Seas returned to the United States recently, launching service from Cape Liberty on Nov. 8.

Ship: Adventure of the Seas
Capacity (at 100% Occupancy): 3,100
Built: 2001
Homeport: Galveston (United States)
Itinerary: Four and five-night cruises to the Western Caribbean
One of the first ships to resume service for Royal Caribbean in North America, the Adventure of the Seas wrapped up a Bahamas-based program in September.

After a drydock in France, the Voyager-class vessel began to offer short cruises from Galveston on Nov. 8

The Harmony of the Seas is another Royal Caribbean ship returning to the United States after spending the summer in Europe.

Since Nov. 14, the Oasis-class ship is offering a winter program of Caribbean itineraries from Port Canaveral.

After offering a series of Greek Islands cruises during the summer, the Jewel of the Seas is returning to Miami.

Starting on Nov. 15, the vessel is offering five- to eight-night Caribbean cruises from its Florida homeport.