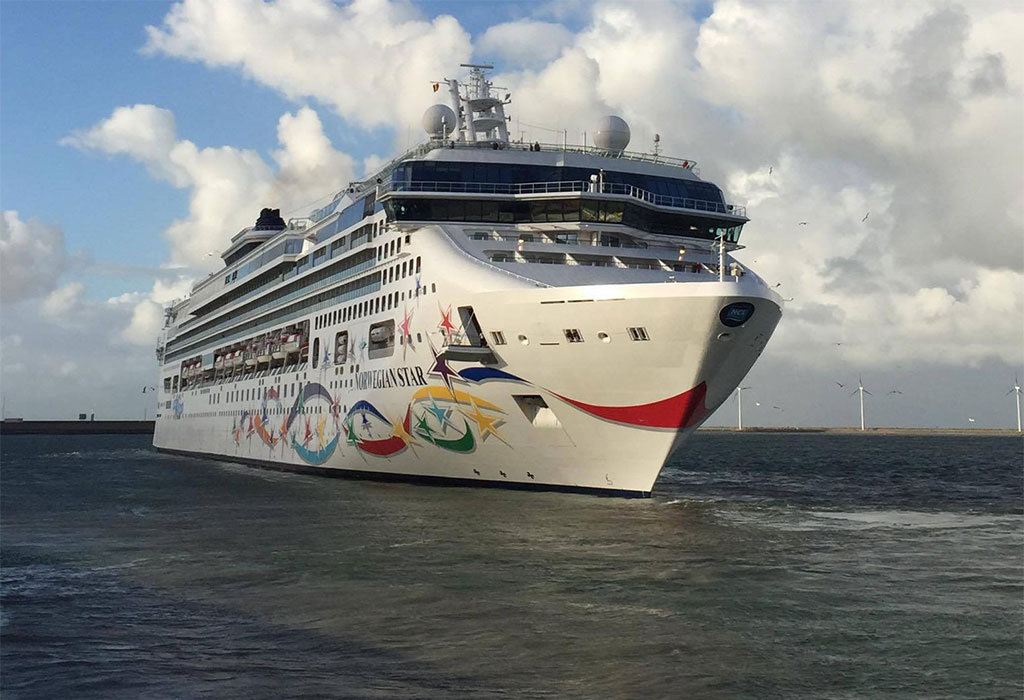 With six ships back in service and several others being prepared for their restarts, the Norwegian Cruise Line fleet is moving again.

The new Norwegian Prima is being built in Marghera, Italy. The recently floated out vessel is currently in its final stages of construction ahead of the 2022 delivery.

The Norwegian Encore resumed service on Aug. 7, 2021, and is currently offering Alaska cruises. The 2019-built Seattle-based vessel is sailing a week-long itinerary with calls in Skagway, Juneau, Ketchikan and Icy Strait Point.

After spending most of the operational pause in Europe, the Norwegian Bliss is back in North America. Set to reenter service on the West Coast in October, the vessel is currently in the Pacific Ocean, on its way to the Port of Los Angeles.

The Norwegian Joy is spending the operational pause in the Port of Oranjestad, Aruba. The vessel is set to resume guest services on Nov. 20 with Caribbean cruises from Miami.

After returning to the Mediterranean in early August, the Norwegian Escape is docked in Civitavecchia, Italy. Prior to this, the 2015-built vessel spent time in Northern Europe and Asia.

The Norwegian Getaway welcomed guests back on Sept. 13 after an 18-month operational pause. The vessel is based in Civitavecchia, Italy, and is currently offering ten- and 11-night cruises to the Eastern Mediterranean.

Another Norwegian ship back in commercial service, the Norwegian Breakaway, is currently offering weeklong cruises to Bermuda. The vessel reentered service on Sept. 26 and is based in New York City’s Manhattan Cruise Terminal.

The Norwegian Epic resumed guest operations on Sept. 5 and is currently offering Western Mediterranean cruises. Sailing from Barcelona, the vessel visits six ports in Spain and Italy on its week-long itinerary.

The Norwegian Gem resumed guest services on Aug. 15 after a 17-month operational pause. The Miami-based vessel is now offering week-long cruises to the Caribbean, visiting destinations such as Great Stirrup Cay and Harvest Caye.

The Norwegian Jade resumed service on July 25, becoming the first ship to resume revenue service for Norwegian Cruise Line. Sailing in the Eastern Mediterranean, the vessel remains in the region through November offering departures from Piraeus, Greece.

After crossing the Atlantic in September, the Norwegian Pearl is docked in Bar City, Montenegro. The port, which is located in the Eastern Mediterranean, has been commonly used for crew transfers and warm lay-ups during the COVID-19 pandemic.

Previously spending the operational pause in North America, the Norwegian Jewel is on its way to Marseille, France. The 2005-built vessel arrived in Europe in August after departing the West Coast several weeks earlier.

Norwegian’s Hawaii-based ship, the Pride of America, is currently docked in Portland. The ship arrived on the West Coast in June for maintenance and drydock work in a local shipyard.

The Norwegian Dawn is awaiting service resumption in Bar City, Montenegro, along with the Norwegian Pearl.

After a drydock in France, the Norwegian Star is currently docked in Naples, Italy.

The Norwegian Sun is awaiting service resumption at the Panama Canal’s Pacific entrance. The 2001-vessel is currently anchored near Taboga Island.

The Norwegian Spirit is another Norwegian ship spending the operational pause in Europe. It is currently sailing to Marseille, France.

After several months docked in Panama, the Norwegian Sky arrived in Puerto Rico on Sept. 14. The vessel is currently docked in the Port of San Juan.