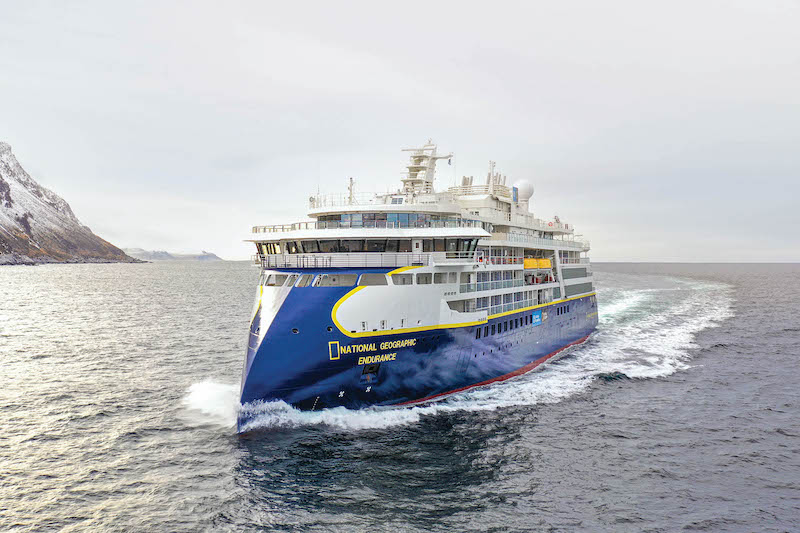 Expedition cruising is no longer a distant dream, with a handful of cruise lines already operating voyages in the Galapagos, Alaska, Iceland, France, the Mediterranean and Australia. More will be joining in later in 2021.

Lindblad Expeditions resumed service on June 4, with three vessels entering service in the same week. Now, the company is offering cruises to the Galapagos and Alaska – where its entire fleet of U.S.-flagged small ships will spend the summer.

After resuming service on June 16, Ponant is planning to offer more than 50 departures to Iceland, the Mediterranean and France this summer.

Highlights include over 30 sailings in the Mediterranean, in addition to new itineraries and ports of call. Sailing from Northern France, Ponant is also offering a unique stop at the brand’s namesake islands, Ponant Islands.

Later, two other vessels, including the newbuild Coral Geographer, were added to the active lineup.

Last August, Metropolitan Touring became one of the first cruise lines to welcome the guests back in the Galapagos.

The Ecuadorian brand offers expedition cruises in the archipelago with a three-ship fleet that includes the 40-guest Isabella I.

On its maiden voyage, the Silver Origin marked the service resumption of Silversea Expeditions. Since June 19, the newbuild is in service in the Galapagos, offering year-round expedition voyages in the Ecuadorian archipelago.

Three other Silversea Expedition vessels are set to resume service in November, ahead of the 2021-2022 season in Antarctica.

Poseidon Expeditions is restarting operations this month, with cruises to the North Pole on the 50 Years of Victory icebreaker.

Starting in October, the company also plans to return to Antarctica, using its main vessel, the 114-passenger Sea Spirit.

Iceland ProCruises is returning to Iceland this summer after a more than a year-long pause in operations.

According to the company’s website, the Ocean Diamond resumes service on July 11, offering a program of five cruises around Iceland and Greenland.

Recently named in Germany, the Crystal Endeavor is set to enter service on July 17.

As Crystal’s first expedition vessel, it will offer a series of ten-night immersive voyages circumnavigating Iceland. In September, the vessel will add an expedition to the Norwegian Fjords to its schedule.

According to its website, Oceanwide Expeditions is ready to restart service in Antarctica in October.

With four ships in service, the company will operate a full 2021-2022 season in the region. The highlight is the new Janssonius, which is currently under construction in Croatia.

Quark Expeditions is planning a service resumption in Antarctica, featuring its first newbuild, the 199-guest Ultramarine. According to its website, the new vessel is set to enter service on Oct. 31, offering expeditions from Argentina.

Three additional ships – the Ocean Adventurer, the World Explorer and the Ocean Diamond – are also poised to resume sailings in Antarctica, starting in November.

Australis is currently planning to restart service with the Ventus Australis. Based in Chile, the company operates a two-ship fleet in Patagonia.

According to its website, the first departure is now scheduled for Dec. 30, sailing from Punta Arenas.