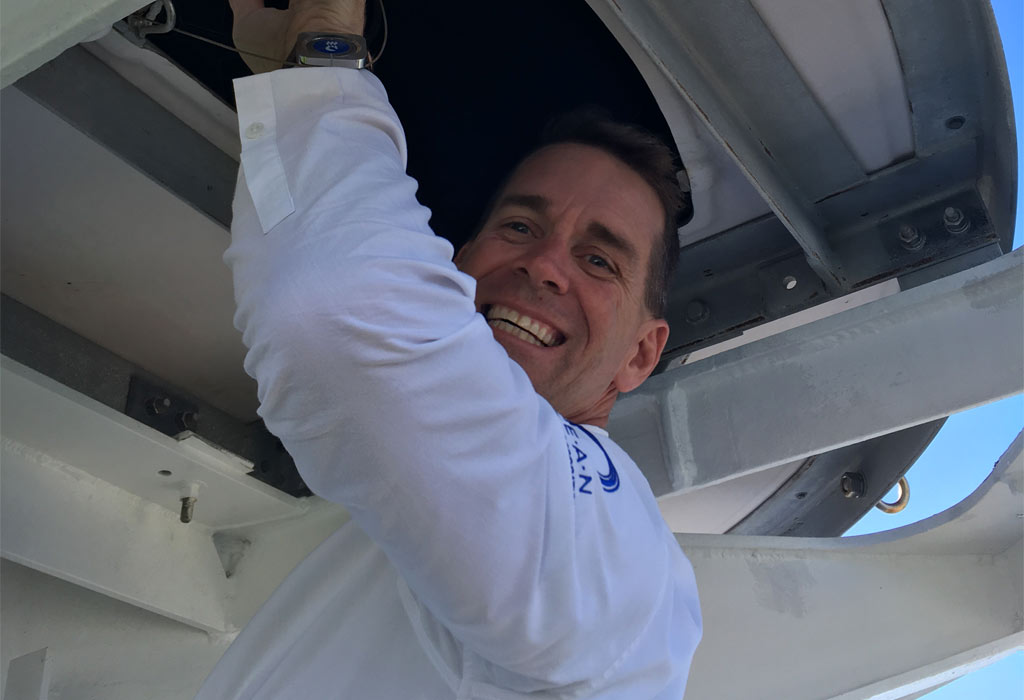 Princess Cruises and Carnival Corporation officials are still pondering how to best present their much-anticipated Medallion Class to passengers. It’s not a new waterslide or port of call; it’s bigger than that – yet it’s intentionally nearly invisible. Interactive maps, keyless staterooms, streamlined passenger check ins and countless other current and in-production functionalities of the OceanMedallion platform will soon be ubiquitous across the Princess fleet – and likely other Carnival brands.

A hands-on gadfly during development, challenging assumptions and poking holes in technical equations, Carnival Corporation CEO Arnold Donald said the potential was limitless during a video call with the Caribbean Princess from his office in Miami, a testament to the ship’s connectivity. The Caribbean Princess is the company’s first fully Medallion-equipped vessel.

“All the other brands will migrate to it. But frankly, we’re looking into partners to expand onto land as well,” Donald said.

Princess President Jan Swartz points to luxury resorts. They may have high-touch service, but their employees don’t know anything about a guest unless they first have an unnatural interaction with a reservation system.

“If you contrast that to the OceanMedallion Class experience, we have now equipped all guest-facing crew with the ability to recognize and acknowledge and thank every guest for their loyalty and engage with them about things that matter to them,” she said, also via a streaming video call between her office and the Caribbean Princess, which was sailing between the Bahamas and Turks and Caicos islands.

It starts with a 1-inch by 1/8-inch plastic circle in a passenger’s pocket, clipped to a shirt, or worn in some other creative fashion. It has no battery or charge. The medallion in essentially a deeply encrypted digital license plate. As it moves around the ship it pings roughly every second off thousands of sensors hidden in plain sight. Its proximity and a quick photo check is an ID and touchless credit card. Order a drink from the smart phone app while by the pool then immediately walk to the ice cream stand. The drink should find you before the cone starts to drip. 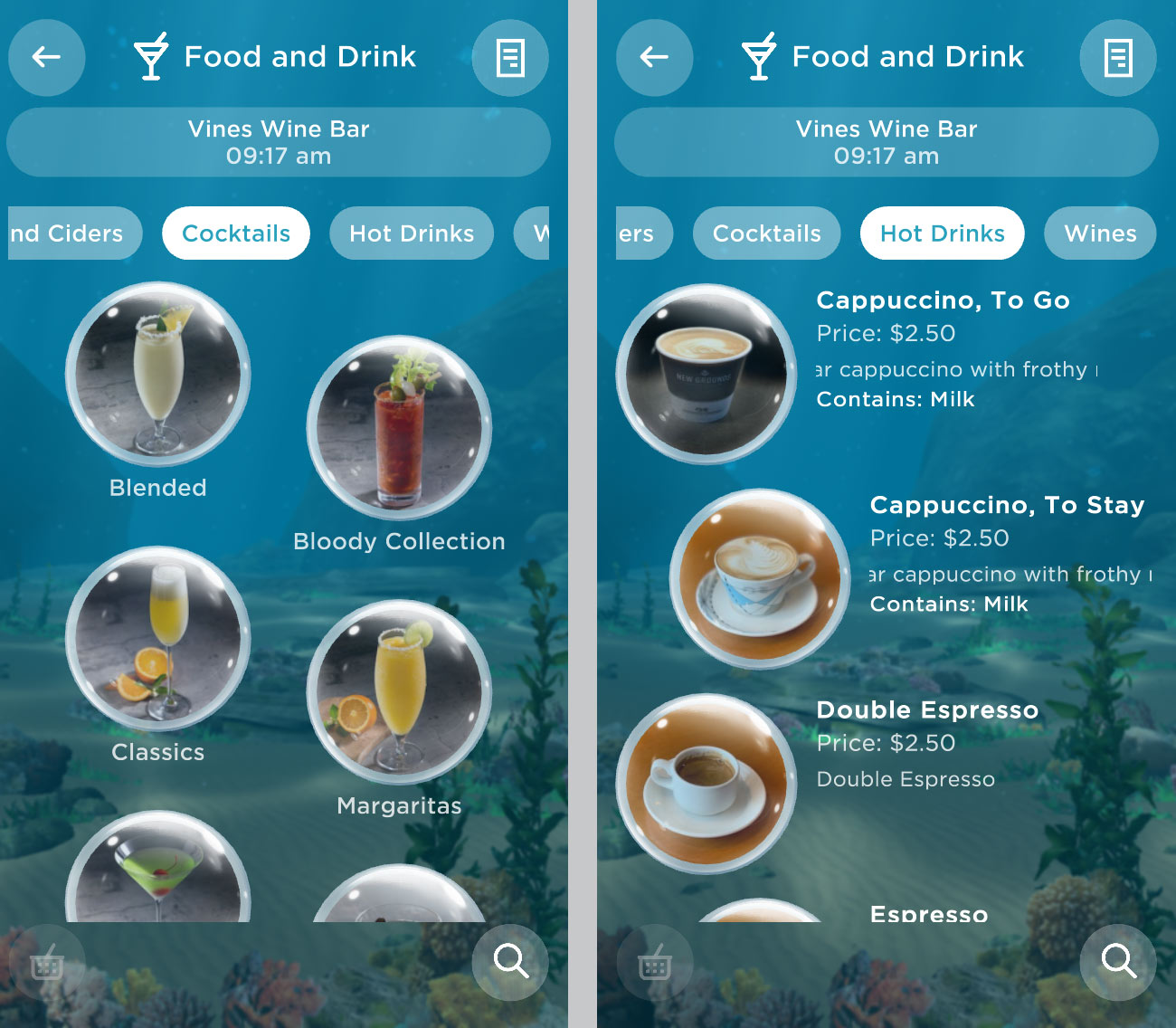 John Padgett, chief experience and innovation officer for Carnival Corporation and leader of the team that conceptualized and implemented Medallion, said the platform should enhance personal interactions between passengers and crew, ship, brand, and each other. “Our strategy is not to deliver you a drink. Our strategy is to offer simplicity throughout the experience.”

It’s all made possible by a constant and pervasive wifi network. Taking a novel approach, it works everywhere and almost all the time because the ship relies on a medley of satellite feeds, both geosynchronous and medium Earth orbit – overcoming the former’s frequent speed problems and latter’s  interruptions in bad weather.

“I wanted to diversify the liability. So, I looked at it from the perspective of a stock portfolio. It’s not really about doing anything but diversifying the liability out of the service,” Padgett said.

MedallionNet is intended to be what’s important for a consumer: fast and omnipresent, Padgett said. 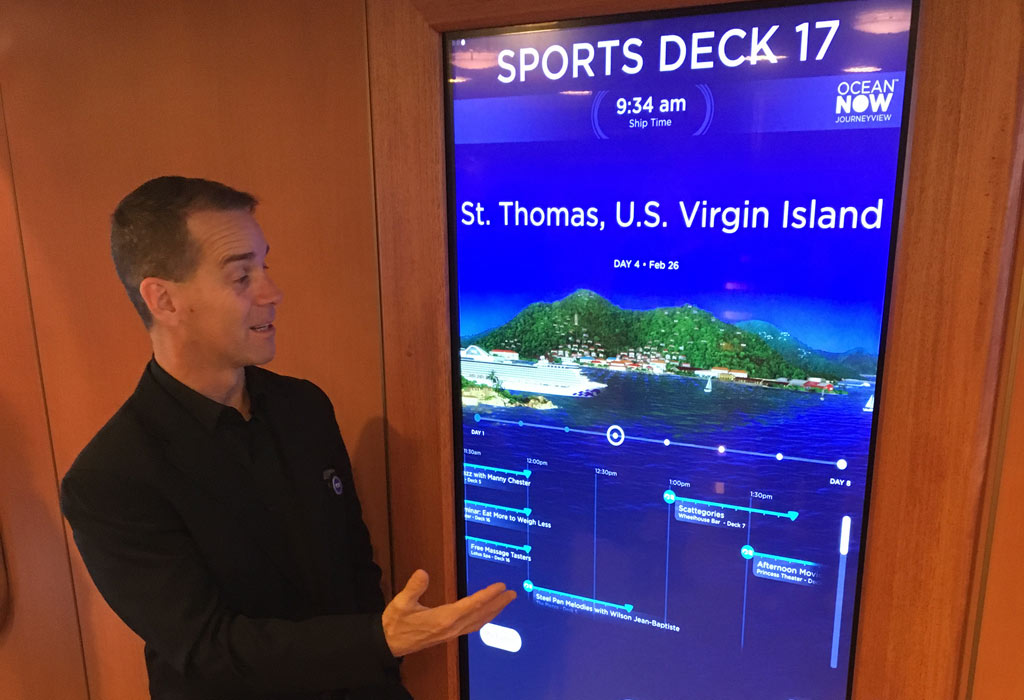 Some onboard games help collect passenger tastes. The This Or That game asks guests to choose between silly things like befriending a dinosaur or a yeti, and potentially more useful information – like would they prefer a speed boat ride or a jet ski. Executives insist the platform is meant to better the product and increase interest in cruising, and is not an overt tool for increasing onboard revenue.

Travel agents can sell an entirely new, top-notch, experience on a decade-old ship with a humdrum itinerary.

“If you think about the origins of the cruise vacation, it was a highly personalized experience and it was simple. You just purchased the cruise, went onboard and you had great service because the ships were so small that with the crew you had that incredibly personal relationship,” Padgett said. “From a guest perspective or a consumer perspective, it’s all about making big ships feel small.”

Retrofits on the Caribbean Princess and Regal were both done within normal drydocks.

“We already have the infrastructure in the additional seven ships ready. So, we have two Medallion-Class ships activated now moving to the Royal followed by the Crown. And there are additional ships ready to go as fast as we can go. The limitation is not technical transformation. Now it’s about experience transformation,” Padgett said. “If we were just focused on turning on all the technology we could go a lot faster, but really we’re about moving service delivery to the next level.”

The things guests are most likely to notice are the easy check in – roughly five minutes from curb to gangway – and keyless stateroom doors that unlock when the medallion is a foot or two away. But the platform comes with a suite of optional smartphone apps. Use OceanNow to get a snack or drink. Use OceanView to watch programming about ports of call and onboard activities. For legal reasons, the OceanCasino app only turns on in international waters. OceanCompass is useful for round-the-ship navigation. Users can also invite shipmates to view their location.