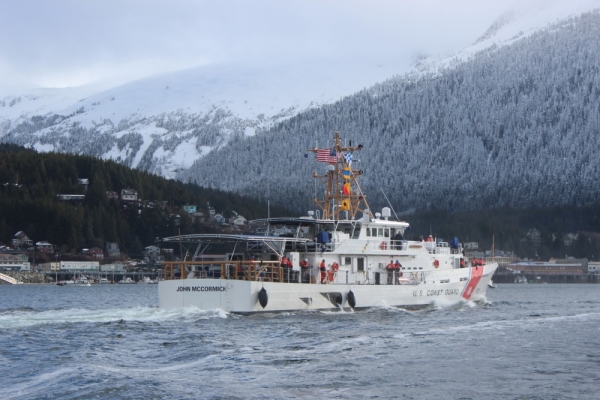 The U.S. Coast Guard removed a record 201 metric tons of cocaine and brought 585 smugglers to justice last year, among its many accomplishments, according to the annual state of the Coast Guard address given March 16 (2017) by U.S. Coast Guard Commandant Adm. Paul Zukunft.

Also last year, more than 5,000 Cuban migrants were apprehended at sea, the highest number in a decade.

The Coast Guard’s mission is to secure the country’s maritime borders, secure maritime commerce and economic security, and protect the marine environment as a branch of the U.S. armed forces.

In 2016, the Coast Guard also created a cyber protection team and hosted an Arctic coast guard forum with participants from 10 arctic nations.

For the cruise industry, the Coast Guard’s routine involvement is in design approvals for newbuilds; periodic inspections of vessels in service for safety and compliance; policing in terms of non-compliance; pollution; port and harbor security; and other aspects.

The Coast Guard is also the go-to-source in ship and boating incidents at sea that would require evacuation or rescue, including medevacing passengers and crew from ships to landside medical facilities.

Commandant Adm. Zukunft said: “When it comes to the economic prosperity of our great nation, perhaps the most overlooked aspect of our mission is the many hardworking men and women on our prevention team; marine inspectors, technical experts in the maritime industry who ensure the security and safety of, and facilitate, maritime commerce that translates into economic prosperity.”

According to Zukunft, the Coast Guard has embarked on an expansion and renewal program with new fast response, offshore patrol and national security cutters being built in addition to three heavy and three medium ice breakers. But more needs to done to replace a fleet of aging inland cutters and to grow the active duty component by some 5,000 people over the next five years.

He said there is an emergence of non-state actors and asymmetrical threats – transnational criminal organizations that erode regional stability, in addition to the largest flow of migrants and refugees since WWII, human trafficking, piracy and illegal fishing, as well as trafficking in drugs, weapons and bulk cash, while at the same time the oceans are expanding as Arctic sea ice retreats.

Thus the Coast Guard has already been deployed around the world this year, off the coast on all seven continents.

After 226 years of service, the Coast Guard today employs nearly 42,000 men and women.