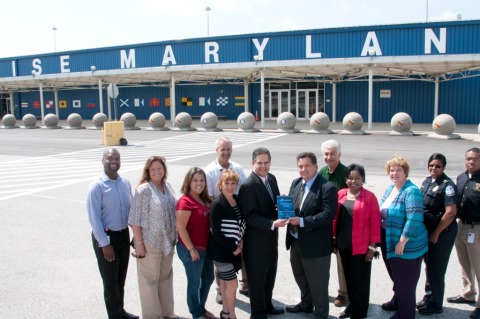 Intercruises Shoreside and Port Services, the company that handles guest relations on cruise days at the Port of Baltimore’s cruise terminal, received the 2011 Guest Logistics Staff of the Year award from Carnival Cruise Lines last night, an honor that recognizes a guest’s experience and level of service at a cruise terminal.  In winning the award, the embarkation staff at the Port of Baltimore triumphed over all other embarkation staffs at North American ports served by Carnival. The award evaluates embarkation practices, hospitality and service, and other pre-and-post cruise measurables.

“We thank Carnival Cruise Lines for this wonderful award,” said Governor Martin O’Malley.  “As the Port of Baltimore’s cruise business has grown tremendously in the last few years, we have made certain that our commitment to providing our passengers with an outstanding cruise terminal experience has not waned.  I congratulate all the labor and staff personnel who work at the cruise terminal and who understand what it means to deliver excellent customer service.”

“At Carnival, the fun begins from the moment our guests arrive at the cruise terminal and our embarkation staff at the Port of Baltimore do a fantastic job at setting the tone for the remainder of the voyage, creating a welcoming atmosphere and demonstrating an exceptional level of service,” said Milly Martin, Carnival’s senior director of guest logistics.  “Our team at the Port of Baltimore is certainly deserving of this honor as they truly live up to the motto of ‘service with a smile!’

Carnival, which began offering year-round cruising from Baltimore in 2009, signed a five-year extension in 2011 to continue sailing from Maryland.  The first two years of the agreement are guaranteed and there are three one-year options.  Carnival provides weekly sailings to the Bahamas and Caribbean.

“I want to congratulate Cindi Schuman and Intercruises as well as all of our International Longshoremen’s Association labor and security cruise terminal partners on this great honor,” said Maryland Port Administration Executive Director James J. White.  “A lot of people work very hard to enhance the overall cruising experience and make sure our cruise terminal is a safe and easily accessible facility.  We will continue to do whatever needs to be done to maintain the high level of expectations that guests expect from us.”